I purchased this Harbor Freight tubing roller, Pittsburgh brand, to roll some tubes for a project.  For initial testing, I used a piece of conduit, and was impressed at how easy it rolled, and that became my template for the first actual tube.  Then I put in a piece of 1.5″ diameter 0.120″ wall steel tubing, and it could barely make it roll at all.  After rolling it back and forth and working up a good sweat, I hadn’t really accomplished very much.  I also could barely turn the screw any farther to make the radius tighter, so not much further progress could be accomplished.

I then got sidetracked by some other stuff, which gave me time to think about it and look for improvements.

From my research, I found some weld on wings that extend the bottom 2 axles outward, which gives the effect of more leverage when the center roller is cranked down.  I liked the concept, but wasn’t too enthused with the price.  I also found an improvement for adding a hydraulic jack to replace the screw jack on the center roller.  Additionally, you could replace the drive axle so that an electric pipe threader can be used to turn it back and forth.

I finally got back to trying to roll some tubing, actually that same piece, and it was still just as difficult.  In the interest of time, I decided to move forward with making the add-on wings myself.  So I made a few measurements, and started cutting some 4″ wide by 1/4″ thick steel.

I marked out the holes, and where I needed some clearance, and then clamped it into the vice to drill the holes.  I clamped all 4 plates together, and bored them all in one shot.  A hole saw made some clearance for the stamped area on the side plate of the HF tubing roller.

Then I test fitted the plates to the tube roller and tack welded them in place:

I’m a fan of testing early and often, and so with just the plate tack welded on, I put the partially rolled tube back in to try it.

In less than 10 mins I had that tube finished off and done! It was so much easier to roll it, and to tighten the screw jack down; those wing add-ons were a huge improvement.

Now that I knew it worked, I disassembled it so I could finish welding everything.

Then I figured I might as well throw on a coat of paint so it doesn’t rust, so I found a can of New Holland Blue spray paint that I had in my stash and painted it!

Then I rolled the second tube for my project in short order!  It was so much easier!

Here’s where the tubes are going, they are part of the roll cage for the ATTC project, read more about it here. 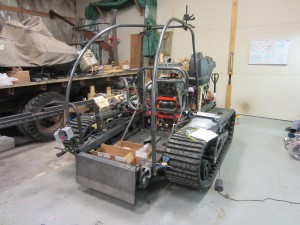