I’m writing this as a bit of a tribute to my dad, for the things he taught me and the memories he created.  You see, my dad passed away when I was 14, so the time with my dad was not as long as some guys get.   However, I’m glad I had the time I did! Dad built this mini-dozer long before me and my twin brother came along, so I know it was before 1980…. In doing some research about it, I’m fairly certain that he built Mini Dozer MD40 by Struck from plans he ordered.  Struck originally came out with the MD34 back in 1967, and following the success of that, followed it up with the MD40 and MD45.  The MD34 plans showed to use 3/4″ plywood as the body, whereas the MD40 shows a sheetmetal body. You can read more about their models and also look at the plans at the Struck website. I’m guessing that he might have bought some of the parts, like the cogged wheels and some other miscellaneous parts.  Dad was fairly cheap, so if he thought he could build it, he probably did.  Also, money would have been tight, as he was a teacher, and teachers don’t make much money, particularly back then.  I think he bought a brand new engine for it, as it was a 7hp Tecumseh, and even as a kid I remember the motor looking like new. However, the tracks were always the weak point on it.  Whenever it got brought out for use, it would tear up the chains, and come off the tracks.  Dad used old agricultural chain, and I’m thinking this chain was already at the end of its life.  The chain was attached to sections of tires to make a crude rubber track assembly. The body was made out of some sheetmetal that had been recycled, hammered flat, and then formed and cut into the general body shape.  It wasn’t exactly pretty and it shook a lot when operating it, but it did work. Around 1999 or 2000, my brother and I fixed the links in the tracks so we could take it out for a spin.  We were in college around that time, so our fixing abilities were getting pretty decent.  We got the tracks fixed up good enough to get it out in the snow and drive it around some.  We even got the blade hooked up, and pushed around some light snow! 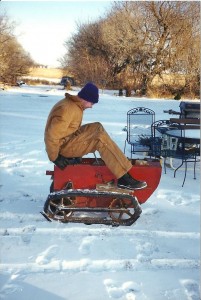 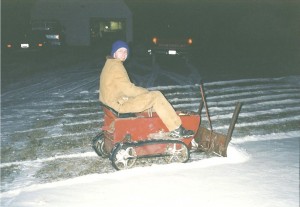 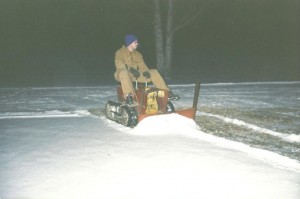 I seem to remember having it out again in the summer or spring, and driving and turning on the grass caused the chain in the tracks to break many of the links.  We were out of spare links to fix it, and so it got parked again. Later we took the motor off to use on something else, and the rest of it just sat and collected dust. When I first started envisioning my snow dozer project, I looked at Dad’s dozer as a possible starting point.  Remembering how slow it went, and mainly the difficulties with the tracks, I quickly sought other plans which turned into my snow dozer.  There was a nice 3 groove centrifugal clutch pulley on the motor that I used, and I also “borrowed” the seat.  The dozer blade assembly was revived to used on the 1967 John Deere 110 lawn tractor that I used as an initial snow removal tool. I don’t regret not using Dad’s dozer, but I still keep thinking about resurrecting into usable piece of equipment. Having recently discovered the plans on the Struck website, and reading through them, I’m starting to think about what it would take to do a light restoration of Dad’s Dozer.  I don’t want to over-restore it as what happens so many times in a restoration.  Instead, what I’d like to do is make some proper tracks for it using new heavy duty chain, some proper track plates, add some stiffener angles inside the body so it doesn’t shake and rattle, and then do some light cleanup on the other items.  I think I’d leave as much as possible original, to keep with his original intent.

This link has a good overview of the Struck dozer’s, written up by the Cub Cadet Man:  Struck Dozer’s

Some background on Dad:

He was a high school teacher for Math, Chemistry and Driver’s Ed.  He was continuously learning, and many summers he went to college, earning Master Degree’s in Chemistry and also Math.  He was interested in many different things, including renewable energy and increasing fuel mileage on cars.  He researched and built a functional wind generator that was tied to electric baseboard heaters in the house; one winter with the wind blowing and negative who knows outside, and the inside of the house was 80F with the furnace off.  However, the blades on the propellers were troublesome, and more often than not they ended as splinters when they flexed and hit the tower.  A self-taught designer, he learned by research, and trial and error, teaching himself what his father never knew or tried to pass on.  Fortunately, dad was a great teacher and mentor, and we learned from his experiences and mistakes.  Many of his hand tools are still in use by me today, even if they aren’t shiny Snap-On ones.